Cascade Books has just published my book, The Good War That Wasn’t—And Why It Matters: World War II’s Moral Legacy. Here is the home page for the book on my website, with links to other sites where it can be previewed and purchased. 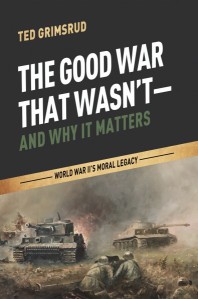 This book is, in essence, a pacifist’s attempt to answer the question, “what about Hitler?” or “what about World War II?” using the moral reasoning of the just war tradition and common American values.

How the book is unique, as far as I know, is that it not only interrogates the War itself, it also traces the impact of the War on American national security policy in the generations since—as well as looking closely as the story of the war opponents and their legacy. END_OF_DOCUMENT_TOKEN_TO_BE_REPLACED