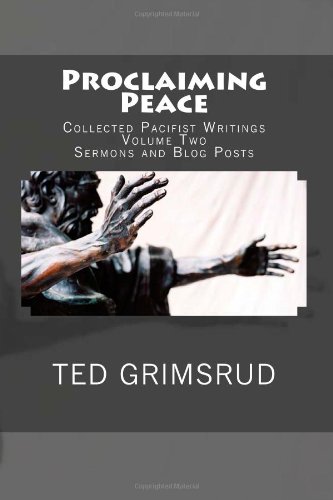 A Mennonite pastor and blogger gathers fifty short writings that present a powerful message of world transformation and healing inspired by Jesus’ way of shalom.

A. Introduction to Pacifism

“I read many peace-related blogs. I am here to say that if you only read on internet site related to Christian peacemaking, read Ted Grimsrud’s PeaceTheology.net. In his accompanying blog, ThinkingPacifism.net, he is ‘thinking aloud’ on peace-related subjects in perceptive ways. Ted is charting what I believe to be the most hopeful ‘post-John Howard Yoder’ path in Anabaptist pacifist thought.”—Michael Westmoreland-While, Pilgrim Pathways

This book may be purchased from the following e-retailers:

It may also be purchased directly from the author for $10 (only in person, no mail orders)

[A slightly different version of this essay was published in J. Denny Weaver, ed., John Howard Yoder: Radical Theologian (Cascade Books, 2014), 334-50. It is a condensed and revised version from several blog posts I wrote in August, 2013, beginning on August 2.]

In June 1992, in a series of investigative articles by reporter Tom Price, the Elkhart Truth, John Howard Yoder’s hometown newspaper, reported on widespread allegations about coercive sexual activities by Yoder. These allegations led to a disciplinary process from the Indiana-Michigan Mennonite Conference in relation to Yoder’s ministerial credentials. [1]  In the years since, debate has continued concerning the nature of Yoder’s offenses and their implications for the use of his theology.

In a helpful discussion Glen Stassen and Michael Westmoreland-White define violence as “destruction to a victim by means that overpower the victim’s consent.” This definition is meant to include domination and psychic damage as well as bodily harm.[2]  What is known of the specifics of Yoder’s actions is discussed in a following section. It suffices here to say that by this definition, these actions were most certainly emotionally, if not physically, violent.

I was a student of Yoder’s at Anabaptist Mennonite Biblical Seminary in the early 1980s and have long been deeply influenced by his peace theology. And, as a consequence, I have been troubled by what I have learned of the sexual misconduct of my peace teacher.

For all of my adult life, ever since I was nearly drafted into the Vietnam War in the early 1970s, I have thought constantly about issues of violence, its effects and how to overcome the problems it causes. Most of my focus has been on violence in relation to war, but I have thought about violence more generally as well. John Howard Yoder’s theology has been influential for me, but others have perhaps influenced me even more in thinking about violence’s origins and impact on our world.

This conversation about John Howard Yoder as doer of violence links in with my interests on several levels. One is on the level of how to make sense of the alleged actions of my teacher who helped me learn so much about peace theology. This problem calls attention to the fact that theology—at least our Anabaptist theology—is not merely abstract theory, but is also about our life and actions as Christians. Another interest is the broader level of thinking about a terrible and oh so personal aspect of the phenomenon of violence—men acting violently toward women, especially in Christian communities. And finally, there is the discussion of how to apply things I have learned about violence from many sources over the years. END_OF_DOCUMENT_TOKEN_TO_BE_REPLACED

[This is the second of two lectures in the Carol Grizzard-Browning Lecture Series at the University of Pikeville (Pikeville, Kentucky). It was presented November 12, 2013. The first lecture was “The Old Testament as a peace book” and may be found here.]

Let me start with a bold claim. The New Testament presents a political philosophy. This philosophy has at its core a commitment to pacifism (by pacifism I mean the conviction that no cause or value can override the commitment to treat each life as precious). This commitment is based on the belief that Jesus Christ as God Incarnate reveals the character of God and of God’s intention for human social life.

Jesus’s identity in the Gospel of Luke

In talking about the New Testament as a peace book, I will look first at how the gospels present Jesus. I will focus on the Gospel of Luke. At the very beginning, from Mary, upon her learning of the child she will bear, we hear that this child will address social reality. He will challenge the power elite of his world and lift up those at the bottom of the social ladder. This child, we are told, will bring hope to those who desire the “consolation of Israel.” Those who seek freedom from the cultural domination of one great empire after another that had been imposed upon Jesus’ people for six centuries will find comfort. From the beginning, this child is perceived in social and political terms.

Later, at the moment of Jesus’ baptism, God’s voice speaks words of affirmation, “Thou art my Son” (Luke 3:22). These words should be understood to name Jesus’s vocation more than simply emphasizing his divine identity. “Son of God” was a term for kings (Psalm 2:7). It states that this person is the leader of God’s kingdom on earth, he has the task of showing the way for God’s will for God’s people to be embodied.

Jesus’ baptism was a kind of commissioning service for this vocation. We see that in the events that following shortly afterward. Jesus retreats deeper into the wilderness and there encounters Satan, the tempter. Satan presented Jesus with temptations that all had at their core seductive appeals to his sense of messianic or kingly calling. He could rule the nations, he could gain a following as a distributor of bread to the hungry masses, he could leap from the top of the Temple and gain the support of the religious powers-that-be through his miraculous survival that would confirm his messianic status. That is, Jesus faced temptations concerning how he would be king. He did not deny that he was called to be “Son of God”—that is, king or messiah. But he did reject temptations to be king in ways he knew would be ungodly. END_OF_DOCUMENT_TOKEN_TO_BE_REPLACED

[This is the first of two lectures in the Carol Grizzard-Browning Lecture Series at the University of Pikeville (Pikeville, Kentucky). It was presented November 11, 2013. The second lecture was “The New Testament as a peace book” and is posted here.]

A journey to pacifism

When I went to college in the mid-1970s, the Vietnam War was coming to an end. I registered for the draft, and was ready to fight if called. The draft ended, though, before I was called. That marked a turning point in my life, nonetheless.

I had just become a Christian. I was taught a Christian should be patriotic and be willing to fight for one’s country. However, I was also urged to read the Bible, especially to read the story of Jesus my savior in the gospels. The gospel story presented Jesus as a peacemaker. This challenged me as I struggled with the possibility of going to war. I also learned to know a number of veterans returning from Vietnam. They told horrific stories—and themselves quite often were traumatized. War didn’t seem so attractive.

About the time I finished college, I came to a clear conviction that I could not fight in war, that I was a pacifist. This conviction came shortly after I had deepened my commitment to live as a Christian—the two went together, as I resolved to be a serious Christian I committed myself to be a pacifist. What I meant by “pacifist” first was “the conviction that it is never morally acceptable to fight in or support war.” My current definition is more like this: “The conviction that no causes or values can override the commitment to treat each life as precious.” In either case, to be a Christian pacifist is to affirm these convictions due to one’s understanding of Jesus’s message.

My task then became—and remains—one of faith seeking understanding. What does it mean to be a Christian pacifist? How should I read the Bible in relation to these convictions? What about all the questions and problems—and the stubborn fact that just about all Christians for hundreds and hundreds of years have not accepted pacifism?

It helped that I had some experience being a minority. I was the only boy with four sisters. I was the only University of Oregon fan in a community filled with Oregon State fans. I was used to being a bit different, so being part of the tiny pacifist minority in a religion filled with warriors was not itself enough to make me think I was wrong….

Not long after my moment of clarity, I discovered a Christian tradition with a long history of pacifist belief and practice—and in time my wife Kathleen Temple and I joined with these Christians and became Mennonites. It has been crucial to not feel totally alone—to have a little bit of critical mass—in these strange beliefs. END_OF_DOCUMENT_TOKEN_TO_BE_REPLACED